The Piazza del Plebiscito is one of the most elegant spots in Naples and plays host to a large number of the city's cultural events. Named after the 1860 plebiscite that brought Naples into the unified Kingdom of Italy, it was built in the first half of the 19th century out of volcanic rock from Vesuvius.

A stroll through the square

Overlooking the piazza are two impressive buildings: at one end stands the majestic San Francesco di Paola Basilica, an imposing Neoclassical structure fronted by a long semi-circular columned gallery and one of Naples' largest churches. Across the square is the Royal Palace of Naples, one of the most interesting monuments in the city thanks to its excellently preserved state.

A beautiful corner of Naples

Thankfully no longer used as car park as it was between the 1960s until 1994, the now-pedestrianised Piazza del Plebiscito is a wonderful place to enjoy a peaceful escape the chaotic traffic of Naples. It's an excellent place from which to visit nearby places of interest like Via Toledo, the Real Teatro di San Carlo, the Galleria Umberto I and the Castel dell'Ovo. 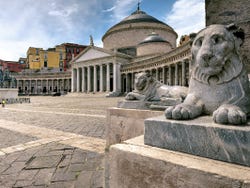 Next to the Gulf of Naples, in the south of the city.

Galleria Umberto I Via Toledo