A beautiful light-filled shopping arcade crowned with a domed glass and steel roof, the Galleria Umberto I was built at the end of the 19th century as part of a long project to rebuild and renovate much of Naples. The gallery is elegantly decorated with murals and sculptures.

The ground floor of the Galleria is home to a number of shops, cafes and restaurants, while the upper floors of the lofty space are dedicated to business offices.

Looking back to the past

Prior to the unification of Italy in the mid-19th century, the Santa Brigida district of Naples was run-down and infamous for crime, fighting and prostitution in its winding lanes. Under the new Kingdom of Italy, the "Risanamento" ("making healthy again") movement began, re-planning and rebuilding Italian cities like Naples.

The Galleria Umberto I, named after the King at the time, was constructed as a space where people could stroll through the area, stay and shop safely.

When the Galleria was built, it was a revolutionary addition to the city, and became a luxurious and fashionable space to shop and eat. These days, a number of shops have been closed, and it doesn't quite shine as it did historically, however it remains a beautiful escape from the madness of the city, and well worth a visit, especially if you're exploring nearby attractions like the Royal Palace, the Real Teatro di San Carlo or the Piazza del Plebiscito. 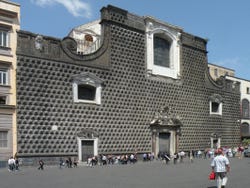