Amalfi was founded as a commercial port in the year 339 under the rule of the Roman Empire, and as the years passed it prospered due to its role in the trade of grains, salt and slaves.

It was an independent republic from the 7th century until a duke was elected in the 10th century. By then, the Duchy of Amalfi was a thriving city rivalling Venice, Genoa and Pisa. After being attacked by the King of Sicily in the 12th century, Amalfi began to decline in importance.

Aside from its eminent schools of law and mathematics and a rich architectural movement in the Medieval times, the town only really began to regain importance thanks to the budding tourism scene for which it is known today.

What to see in Amalfi?

Amalfi is a town of great beauty and it is a true pleasure to explore the pretty streets and historic monuments. If you've got a day to spare during your trip to Naples, we highly recommend visiting the following must-see places:

How to get to Amalfi from Naples?

Amalfi is located 45 miles (70 km) southeast of Naples. While there is a bus connection between the destinations, it takes two hours and there are only a couple of departures each day, so it's much easier to rent a car and drive or to book an excursion with transport included.

The easiest and most comfortable way to get to know Amalfi is to reserve an excursion which includes hotel pick up and drop off, so all you need to do is sit back and enjoy the stunning views of the Amalfi Coast.

We offer a number of different day trips, depending whether you'd like to just visit Amalfi, or combine your excursion with a tour of Sorrento, Positano or Ravello. Take a look at the different options via the following links:

If you enjoy driving and prefer to explore at your own pace, the next best option is to hire a car and drive along the Amalfi Coast. The journey between Naples and Amalfi takes between an hour and a half and two and a half hours, depending if you follow the coastline or drive inland. Please note, many of Italy's roads are toll roads!

Get an idea for car rental prices here. 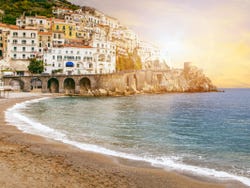 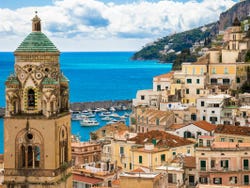