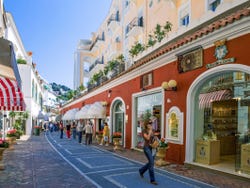 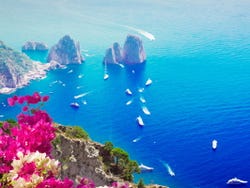 Inhabited since ancient times, Capri was home to the magnificent villas of great Roman Emperors like Augustus and Tiberius. The island was then all but forgotten for several centuries, coming under the control of the various rulers of Naples and suffering a series of pirate attacks before being re-discovered as a popular resort for wealthy European artists, writers and other celebrities.

What to see in Capri?

Capri deserves its luxury reputation: spectacular landscapes of rugged, cave-dotted cliffs and mesmerising azure sea are worthy of the best postcards, and if you're not captivated by the songs of the mythical sirens that inhabit the island, you'll be by the enchanting lanes of its picturesque towns.

It's roughly divided in two between the town of Capri, which occupies the centre and east of the island and is known for its glamour and fashionable visitors, and Anacapri, the somewhat more relaxed but still equally charming western area.

Fill your trip to Capri with visits to the following unmissable sights:

How to get to Capri from Naples?

The only way to get to the island is by boat, whether by public ferry or by organised tour:

The easiest and most comfortable way to get to visit Capri from Naples is to reserve an excursion which includes hotel pickup and drop off, an English-speaking guide, and visits to the island's top sights, so all you need to do is sit back and enjoy the stunning views!

Take a look at the different options via the following links:

The ferry route between Naples and Capri is operated by three different companies: SNAV, NLG and Caremar. There are usually two boats per hour between 7 am and 6 pm, and one departure an hour afterwards until 9 pm or 10 pm. The journey takes around an hour and costs around € 20 (US$ 21.70) each way depending on the company and the time of day.